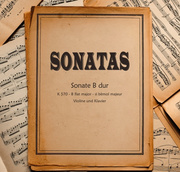 Sonata literally means a piece played as opposed to a cantata, a piece sung.

The term evolved through the history of music, designating a variety of forms until the Classical era, when it took on increasing importance, and is vague.

By the early 19th century, it came to represent a principle of composing large-scale works.

It was applied to most instrumental genres and regarded—alongside the fugue—as one of two fundamental methods of organizing, interpreting and analyzing concert music.

Though the musical style of sonatas has changed since the Classical era, most 20th- and 21st-century sonatas still maintain the same structure.

The term sonatina, pl. sonatine, the diminutive form of sonata, is often used for a short or technically easy sonata.