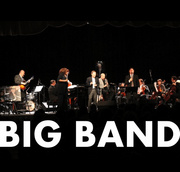 Beginning in the mid-1920s, big bands were the main popular music. These bands did little improvisation.

By the end of the 1920s, big bands added more improvised soloing.

Radio was a major factor in helping bandleaders like Benny Goodman to achieve fame.

Swing music began in the 1920s and flourished through the early 1930s.

There was a considerable range of styles among the hundreds of popular bands.

While jazz "combo" performances are largely improvised, big band music is primarily crafted in advance by an arranger.