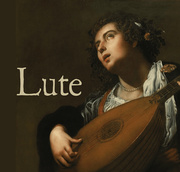 The European lute and the modern Near-Eastern oud both descend from a common ancestor via diverging evolutionary paths.

The lute is used in a great variety of instrumental music from the Medieval to the late Baroque eras and was the most important instrument for secular music in the Renaissance.

It is also an accompanying instrument, especially in vocal works, often realizing a basso continuo or playing a written-out accompaniment.

The player of a lute is called a lutenist, lutanist, "lewtist" or lutist, and a maker of lutes (or any string instrument) is referred to as a luthier.