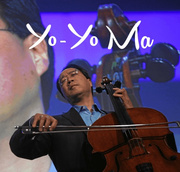 YO YO MA Sampler

His mother, Marina Lu, was a singer, and his father, Hiao-Tsiun Ma, was a violinist and professor of music at Nanjing National Central University.

His family moved to New York when he was five years old. Ma began studying violin, and later viola, then the cello in 1960 at age four.

His first choice was the double bass due to its large size.

He began performing before audiences at age five, and performed for Presidents Dwight D. Eisenhower and John F. Kennedy when he was seven. At age eight, he appeared on American television with his sister, Yeou-Cheng Ma, in a concert conducted by Leonard Bernstein.

Ma studied at the Juilliard School at age nine with Leonard Rose and briefly attended Columbia University before ultimately enrolling at Harvard University later on.

Prior to entering Harvard, Ma played in the Marlboro Festival Orchestra under the direction of nonagenarian cellist and conductor Pablo Casals.

Ma would ultimately spend four summers at the Marlboro Music Festival after meeting and falling in love with Mount Holyoke College sophomore and festival administrator Jill Hornor his first summer there in 1972.