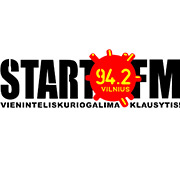 Start FM is a non−profit radio station which broadcasts only non copyright music. All the music in our playlist is made by independent bands and musicians who are represented by small non commercial labels.

The radio was launched on September 2005. At first the concept was quite different compared to what we have today. It had to be changed not actually evolutionarily, but revolutionary.

Besides the independent music, we also use open source software. The majority of the people who  work here are volunteers , spending their free time to ensure that the listener would get the information and music. The variety of music is wide, although the styles refer to so called „underground“. The most popular styles are ska/punk, dub/reggae, hardcore,/metal, nu-jazz/electro/bbeats/rappa . There are no ads which might interfere with the stream of music. But there are was pieces of alternative poetry written by young and sometimes perspective Lithuanian authors, which sometimes you can hear between two music compositions.