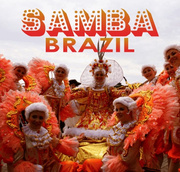 Samba!..is the vibrantly diverse yet simple dance of Brazil that has a rich and complex history dating back to the 1600’s.

A dance and sound originating from the African slave trade is now the most well known expression of Brazil and the world famous “Carnival”.

From it came bossa nova and a progressive culture filled with rhythm and optimism. Come alive! Show your colours and display those feathers with our Samba channel.

Featuring the best of this energizing genre with Beth Carvalho, Clara Nunes, Seu Jorge, Braguinha and more! 1 and 2 and 1 and 2 and….

Samba is a Brazilian musical genre and dance style, with its roots in Africa via the West African slave trade and African religious traditions, particularly of Angola and the Congo, through the samba de roda genre of the northeastern state of Bahia, from which it derived.

Although there were various forms of samba in Brazil in the form of various popular rhythms and regional dances that originated from drumming, samba as a music genre is seen as originally a musical expression of urban Rio de Janeiro, then the capital and largest city of Imperial Brazil.

It is recognized around the world as a symbol of Brazil and the Brazilian Carnival.

Considered one of the most popular Brazilian cultural expressions, samba has become an icon of Brazilian national identity.

The Bahian Samba de Roda (dance circle), which became a UNESCO Heritage of Humanity in 2005, is the main root of the samba carioca, the samba that is played and danced in Rio de Janeiro.