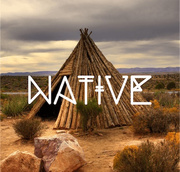 Singing and percussion are the most important aspects of traditional Native American music.

Vocalization takes many forms, ranging from solo and choral song to responsorial, unison and multipart singing.

Percussion, especially drums and rattles, are common accompaniment to keep the rhythm steady for the singers, who generally use their native language or non-lexical vocables (nonsense syllables).

Music and history are tightly interwoven in Native American life.

A tribe's history is constantly told and retold through music, which keeps alive an oral narrative of history.

These historical narratives vary widely from tribe to tribe and are an integral part of tribal identity.

The Native American flute has achieved some measure of fame for its distinctive sound, used in a variety of new age and world music recordings. Its music was used in courtship, healing, meditation, and spiritual rituals.

The Native American flute is the only flute in the world constructed with two air chambers.