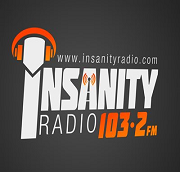 Insanity Radio 103.2FM is a community radio station broadcasting to north Surrey, England from Royal Holloway, University of London on 103.2FM, 1287AM and online.

It targets young people in the 15-25 age bracket, broadcasting a varied schedule of locally-produced programming for up to 18 hours per day during term time. Live programmes run from 7am to 1am on weekdays, starting at a later time of 9am on weekends. Overnight, a selection of music from the station's playlists is played.

In late 2013, the station reported having over 140 volunteers producing 92 weekly shows.