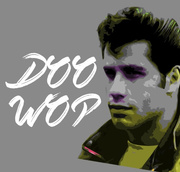 Doo-wop is a genre of music that was developed in African-American communities in New York, Philadelphia, Chicago, Baltimore, Newark, Pittsburgh, Cincinnati, Detroit, Washington, D.C. and Los Angeles in the 1940s, achieving mainstream popularity in the 1950s and early 1960s.

Built upon vocal harmony, doo-wop was one of the most mainstream, pop-oriented RnB styles of the time.

Singer Bill Kenny is often called the "Godfather of Doo-wop" for his introducing the "top and bottom" format which featured a high tenor singing the lead and a bass singer reciting the lyrics in the middle of the song.