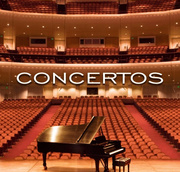 A concerto is a musical composition usually composed in three parts or movements, in which (usually) one solo instrument (for instance, a piano, violin, cello or flute) is accompanied by an orchestra.

The concerto, as understood in this modern way, arose in the Baroque period side by side with the concerto grosso, which contrasted a small group of instruments with the rest of the orchestra.

The popularity of the concerto grosso form declined after the Baroque period, and the genre was not revived until the 20th century. The solo concerto, however, has remained a vital musical force from its inception to this day.