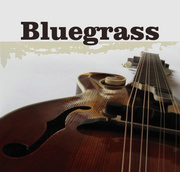 Bluegrass music is a form of American roots music, and a sub-genre of country music.

It's Methodist and Holiness and Baptist. It's blues and jazz, and it has a high lonesome sound.