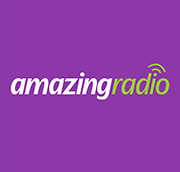 Amazing Radio is a new kind of radio, dedicated to playing 100% new and emerging music. Amazing Radio is an international radio station first broadcast originally on digital radio in the United Kingdom. The station plays new music from a number of music genres including pop, rock, indie, hip hop, electronica and jazz.

The station originally broadcast on the Digital One ensemble which replaced the temporary Birdsong test transmission which had been running for a year and a half beforehand.