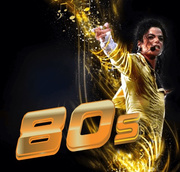 The 1980s saw the emergence of pop, dance music and new wave.

As disco fell out of fashion in the decade's early years, genres such as post-disco, Italo disco, Euro disco and dance-pop became more popular. Rock music continued to enjoy a wide audience.

Throughout the 80s, Glam metal had become the largest, most commercially successful brand of music in the United States and worldwide. The 1980s are commonly remembered for an increase in the use of digital recording, associated with the usage of synthesizers, with synthpop music and other electronic genres featuring non-traditional instruments increasing in popularity.

Also during this decade, several major electronic genres were developed, including electro, techno, house, freestyle and Eurodance, rising in prominence during the 1990s and beyond.